The Foundation Stone of the Church of the Redeemer 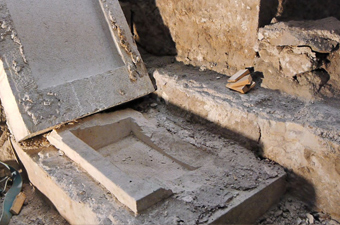 In 1893 the German Kaiser Wilhelm II had laid the foundations of the new church symbolically on the supposed "Second Wall", the city walls of Herod the Great from the time of Jesus of Nazareth, to reaffirm that the rock below the Holy Sepulchre is the biblical Golgotha.

The foundation stone, which was constructed from differently-sized fieldstones cut square at the base was five stone rows high. Inside it was a carefully hewn stone case that was constructed about 10cm high and about A4 shape to hold a bronze casket. The two halves of the casket were sealed with tin.

On 1 June 2011, in the presence of numerous guests from the Parish Church Council, and from the worlds of politics, culture and science, as well as through the energetic efforts of Matthias Platzek, Minister President of Brandenburg, Prof. Dr. Hans-Joachim Gehrke, president of the DAI Berlin (retired) and Prof. Dr. Dieter Vieweger (GPIA) the foundation stone of the Church of the Redeemer in Jerusalem was opened.

The Minister President had to work hard to open the bronze casket. In it were the objects listed in file 56/585 of the Jerusalem Foundation, a Luther bible (revised text), a facsimile of Luther’s theses and three 5-mark coins with the bust of Wilhem I, Friedrich III and Wilhelm II. The Bible and Martin Luther's 95 theses were in a poor state of preservation considering the short time that they had been under the ground. The certificate described in written sources (“Das deutsche Kaiserpaar im Heiligen Lande”, Berlin 1899, pages 8-10) Wilhelm II was already irretrievably decayed.

When the Minister President opened the bronze casket, everyone was so busy with the exciting situation that a substantial find remained unnoticed until the follow-up work and careful documentation the next day: In the paper dust of what once was the emperor’s certificate, a lock of well-preserved hair was hidden. This is the real mystery. Which woman did the lock of hair come from? The empress only came to Jerusalem five years later. Nothing is reported in the sources. – The GPIA is offering a prize for any information on this that leads to a useful and convincing theory!