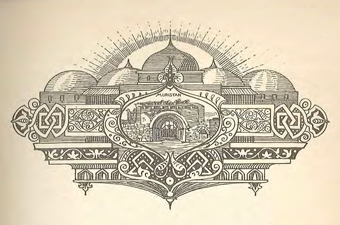 The name "Muristan" refers to the approximately square-shaped area to the south of the Holy Sepulchre up to the David Street. At its centre is now the Greek bazaar, in its northeastern corner is the Church of the Redeemer.

The Muristan was up to the first century BC a quarry that had filled with silt and humus to become garden land in Jesus' time. The place gained special importance by its proximity to the presumed site of the crucifixion of Jesus. It was here that the Roman emperor Hadrian built a podium temple to Aphrodite in around 135 AD – perhaps as a deliberate covering of a Christian place of worship. The valley to the south of it was filled in. In the 4th century AD, the Emperor Constantine built the central Christian sanctuary, the Holy Sepulchre, in place of the temple. Pilgrims now increasingly flocked to Jerusalem.

Even after the Islamic conquest in 638 Christian pilgrims could travel to Jerusalem. In the 9th century, Charlemagne founded a hospice for pilgrims and a church of St. Mary in the Muristan. In the 11th century merchants from Amalfi refounded St. Mary's Church and the hospice, which had apparently been destroyed. In the Crusader period (1099-1187) the Muristan had its heyday as a centre of pilgrimage. It was here that the Order of St. John was established, which until 1188 ran the huge complex with hospice and hospital for hundreds of pilgrims and which rebuilt the Abbey of St. Maria Latina in 1150. A mosaic floor of the church is still visible at the Church of the Redeemer. The original cloister is included in today’s complex.

After his victory over the Crusaders (1187), Saladin founded a hospital on the site, which has since borne the Persian name "Muristan" ("Hospital"). The Christian pilgrims had to stay away from Jerusalem for some time, but in the 14th and 15 century the former St John's hospice was once again in operation. From 16th century onward pilgrim numbers decreased significantly as a result of the Reformation. The former monastery of St. Maria Latina may have been made into an Islamic law school (madrasa) in the 13th century. The decaying church later housed a prison and simple housing and workshops. The cloister was used partly as a caravanserai. The gradual decline of the Ottoman Empire from the 17th century onward also brought about the decline of Jerusalem. In the 19th century a large part of Muristan was in ruins and buried under rubble.

The exhibition traces the history of the "Muristan" up to the 19th century. Objects found in excavations under the Church of the Redeemer and the cloister and architectural fragments tell the story of the medieval abbey of St. Maria Latina and later life in its ruins. Crusader-period maps illustrate pilgrim life. Photos and drawings from the 19th century show the state of "Muristan" in that period.